Oluwatobiloba Daniel Anidugbe, well known in the entertainment industry as Kizz Daniel, is an afrobeats singing sensation and performer who is now enjoying success with his new project, “Buga.”

“Buga” made its Apple Music Top 100 debut in various nations during its first week of availability. On Wednesday, June 22, 2022, Kizz Daniel blessed the screens with a vibrant and attractive video to the song as a follow-up.

The video, which has a carnival theme, was directed and photographed by TG Omori, also known as “boy director,” a well-known Nigerian director. An update on the situation shows that 7 days after its debut, the “Buga” music video has received over 11 million views on YouTube.

Here is a screenshot. 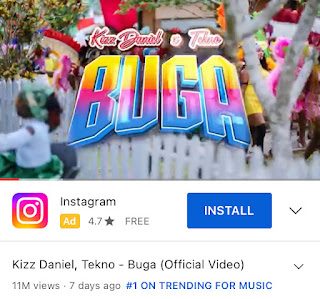 The chart topping tune has also gathered over 68 million streams on YouTube. This YouTube feat is coming after Kizz Daniel revealed his intentions of performing the viral song at the 2022 World Cup.